Investigating prey of harbor and gray seals in Southeastern Massachusetts

Since 2016, CCS Marine Biologist Lisa Sette has been working with collaborators from International Fund for Animal Welfare (IFAW) and Northeast Fisheries Science Center (NEFSC) to collect scat samples from seal haul-outs across Southeastern Massachusetts. One of the key study areas is Pleasant Bay; other locations include Jeremy Point in Cape Cod Bay and Head of the Meadow on the Outer Beach in Truro. The results of the Pleasant Bay study are included in the CCS Ecosystem Assessment of Pleasant Bay. Lisa works in conjunction with Louisiana State University (LSU), IFAW, and NEFSC to collect samples from seal haul-outs throughout the year.

Back at the lab, each sample is dissected and hard parts such as fish otoliths (ear bones), squid beaks, dermal denticles (modified scales from skate species), shells, bones and teeth are collected. Diet is estimated based on the identification of the source species of those hard parts and the frequency with which they appear in the samples.

During scat collection Sette also gathered samples for LSU graduate student Keith Hernandez. Hernandez is using these to complete prey DNA analysis to identify prey that is often missed by hard part analysis alone.
Preliminary results for diet work suggest that the seals take advantage of what is seasonally available. Paper forthcoming.
While sieving scat for hard parts, inorganic micro debris (i.e. plastics) were detected in four samples. Sette worked with CCS’s Christy Hudak to analyze these and published a note of their findings.

Understanding seal occupancy patterns through aerial surveys
Over the past thirty years, gray seals have repopulated southeastern Massachusetts where they once were present prior to seal bounties. This expansion in their  range along the Northwest Atlantic has led to a greater number of seals present in our local waters . 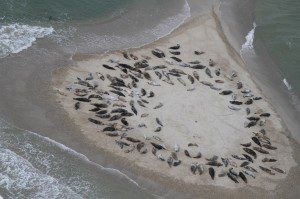 Gray seal haul out in Nantucket Sound. Photo taken by CCS under NOAA Permit No. 17670

The goal of this project was to conduct year-around monthly aerial surveys of major seal haul-out sites in southeastern Massachusetts coastal waters to increase our understanding of  seal occupancy patterns in the region.

Funding for the Seal Research Program has been provided by Friends of Pleasant Bay, International Fund for Animal Welfare, Island Foundation, The Mandel Family Foundation/Amy Mandel & Katina Rodis Fund, and the University of New Hampshire.

Click here to learn more about the species of seals found on Cape Cod.

NOTE: Please be a responsible seal watcher. Remain 50 yards away from seals at all times. Seals are protected under the Marine Mammal Protection Act.

To report violations of the MMPA or seal harassment, contact NMFS Enforcement 1-800-853-1964