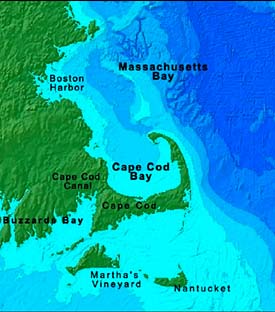 Cape Cod Bay is ecologically rich with a complex and diverse array of coastal and marine habitats.

Beaches, wetlands and offshore water provide important habitats for plant and animal communities that include commercially valuable species of finfish and shellfish as well as endangered marine mammals and birds. Endangered bird species such as the Roseate Tern and the Piping Plover utilize the bay’s natural resources.

The Bay was designated as a State Ocean Sanctuary on July 15, 1970. A semi-enclosed embayment that forms the southernmost extremity of Massachusetts Bay, Cape Cod Bay is bounded by Cape Cod to the south and east, Plymouth County to the west and Massachusetts Bay and the open ocean to the north. The Bay is partially surrounded by approximately 300 miles of shoreline comprised mostly of beaches backed by dunes and low bluffs. The Bay is connected to Buzzards Bay by the Cape Cod Canal, which divides Cape Cod from the rest of the mainland and is the site of major shipping traffic between Boston and New York.

The Geology of Cape Cod Bay

Surface waters of the bay encompass 604 square statute miles with a maximum depth of 206 feet; being shallower at the southern end and deeper as it opens into Massachusetts Bay. Cape Cod, Martha’s Vineyard and Nantucket were all formed at the end of the last ice age when the Wisconsin ice sheet dissipated between 16,000 and 20,000 years ago. The distinctive, arm-shaped landmass of Cape Cod slowly formed as retreating glacial lobes deposited sand, silt and clay, creating moraines and outwash plains. The Provincetown hook, or “fist,” at the end of the arm, along with the numerous barrier beaches that rim the outer Cape, were formed as wave, wind and tidal action deposited sediments from surrounding glacial deposits on the ocean floor.

The Bay is part of the much larger Gulf of Maine which contains some of the world’s most productive waters. Surface water within the bay moves in a counter-clockwise pattern driven by the prevailing circulation of the Gulf of Maine. Strong tides also move water in and out of the Bay flushing the system with nutrient-rich ocean water, regularly exchanging about 9.3 percent of the total bay water volume maintaining a well-mixed marine environment helping to sustain a relatively healthy and productive system.

Cape Cod Bay exhibits a distinct seasonal cycle of surface water stratification and mixing. In the winter, bay water is roughly the same density top to bottom and mixes easily becoming nutrient-rich throughout. In the spring, summer and early fall the surface water becomes warmer and less dense than the deeper water producing stratification. Biological productivity in the bay is maximum in the spring because then the water is both stratified and rich in nutrients.