Between two major winter storms that left much snow on the Cape and islands the CCS Aerial Survey team was able to get a flight in on Sunday. Clear skies and calm seas awaited as the survey in search of right whales went from south to north.

The first right whale of the day was observed whale swimming and diving in the eastern portion of the Bay in line with Jeremy’s Point in Wellfleet. This individual has been identified as EGNO 1716, an adult male first seen in 1982, and who has been sighted in Cape Cod Bay sporadically since 1999.

As the survey continued another single right whale was sighted in the northwestern part of the Bay parallel to Plymouth Harbor. The preliminary identification for this whale is EGNO 1419, another adult male who was first sighted in 1984, and had been observed in Cape Cod Bay on and off since 1995, and most recently in 2011. As the survey continued a blow right off of Race Point turned out to be a fin whale. The survey was completed in lovely conditions. The Center for Coastal Studies right whale aerial team completed a Cape Cod Bay survey on this very chilly Friday. We took off at 11:30 AM in hopes that the forecast would prove correct and the winds would die down (which they did) and began our track lines in the south. We encountered our first right whale an hour later in the southwestern portion of the bay subsurface feeding! This individual has been identified as “Arpeggio,” an adult female born in 1997, and who we have seen in the bay almost annually since 2003.

After collecting our data we left this sighting and continued on survey. We observed two fin whales before seeing our second right whale miles west of Provincetown. This individual, EgNo 1328 – an adult male who has been a regular visitor to CCB since the early 1990’s – had mud on its head, suggesting it was feeding near the ocean floor.

The survey was completed a little after 3 PM without seeing any additional marine mammals, and excited to see what the next survey on the eastern outer shore brings.

February 15, 2016
The aerial team flew this season’s first survey east of Cape Cod on Monday! Finding weather windows calm enough to survey the eastern track lines can be difficult this time of year. Monday, however, was a lovely clear day and the team was thrilled to fly the outer shore in a north to south direction. No right whales were sighted, though the team did observe two fin whales and a couple pods of dolphins. With any luck, the team will be back in the air later this week to find right whales that may be within the Bay! Wednesday after a few days of relatively high winds the aerial survey team was pleasantly surprised to have calm seas when we started our Cape Cod Bay survey. Going from south to north, the track lines were pretty quiet until two hours into our flight when our first (and only) right whale was spotted. This animal was elusive with long dives and surfacing in random directions, it took about 20 minutes of circling to successfully get sufficient photographs for individual identification. This right whale has been identified as EGNO 3420 “Platypus.” Platypus is an adult female born to EGNO 2460 “Monarch” in 2004, was brought to Cape Cod Bay that year, and gave birth to her first calf last year off of Georgia. We have observed about 12 individuals in Cape Cod Bay so far this season, and are waiting with anticipation for the usual annual influx later this spring. 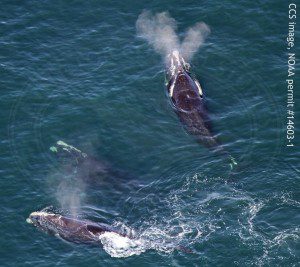 Yesterday a public report of a small group of right whales off Sandy Neck came in to our colleagues at WDC/NEFSC, and they kindly relayed this information to CCS. This 2016 season has seen small numbers of whales on each flight and so we were excited at the opportunity to document this influx of animals into the Bay.

The aerial team departed from Chatham Municipal Airport on this hazy Friday. We began our track lines in the north working south and saw our first right whales in the northern portion of the Bay. This sighting was especially exciting because it involved three individuals in a SAG or “surface active group,” and our first time observing this activity in 2016. This social behavior involves body contact between two or more whales at the surface and thought to play a role in social bonding and mating.

After this sighting we continued our track lines and encountered two more right whales travelling alone, one slightly southeast to our SAG sighting and the other a few miles west of Jeremy’s Point in Wellfleet. Also observed were two fin whales, one minke whale and 10 unidentified dolphins during this survey. We landed prior to sunset in calm conditions happy with the increased presence of right whales in the bay. The aerial survey team flew on Sunday and the day was well worth it, in that we found nine right whales, the highest number so far this season! We flew Cape Cod Bay in the north to south direction, near Provincetown we were rewarded with multiple whale sightings. Four of these sightings turned out to be fin whales; we also had multiple other sightings of the right whale variety. While many of these animals were elusive, spending much of their time subsurface, our pilots, Joe and Trevor of New England Specialized Aviation Services, always put us in prime location to gather the photographs that we needed!

The highlight of our day was finding a surface active group (SAG), the second for the season, in the north part of the bay. The SAG had three individuals all rolling around each other. These individuals were matched as EgNo’s 1056 “Snoopy”, 1980, and 2615 “Reef”. They all are adult males known to have visited the Bay in previous years. Overall, it was a long flight with the most Eg’s sighted in a single flight this year. Here’s hoping we continue this upward trend on our next survey! The CCS aerial team flew early on Saturday and was able to get a full survey in before the wind picked up in the early afternoon. It was a great flight, flying Cape Cod Bay in a north to south direction. We had three fin whales close to Provincetown and then a right whale sighting in the middle of the Bay. However, the real excitement began when we got down to our last two track lines.

By Sandy Neck there were right whales popping up left, right, and center! Two groups were in participating in a surface active group (SAG) in the area. SAGs are exciting to see, but sometimes difficult to photograph as, by nature, SAGs can create a lot of white water with individuals rolling and touching. Combine that with the increasing sea state and some individuals can take a little extra time to identify as we discern which body parts belong to each animal. The team is happily up to the task!

The tally for the flight was twelve animals, which means our sightings are increasing each time we fly and we’re finally in the double digits.